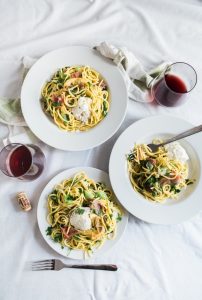 The caper, also referred to as Capparis Spinosa, grows on spiny perennials highlighted by sizable white and pink flowers.  Capers are officially classified as buds.  Though there are other parts of capers that grow on perennial bushes, the bud is the component most commonly used for culinary purposes.  Take a look at the ingredients listed on the top Italian dishes and sauces and you are sure to find capers listed for good reason: these diminutive buds pack a powerful punch of flavor.

The Origins of the Caper
Capers grow along walls and rocks throughout the Mediterranean region.  Most capers are either pickled or salted prior to consumption.  These small buds are commonly used as seasonings as well as garnishes in a wide variety of Italian dishes.  It is believed capers originated in especially dry parts of central and western Asia.  In fact, the Sumerian clay tablets mention capers in Gilgamesh’s writings.  Historians insist the ancient Greeks used capers for cooking as well as medicinal purposes.

Capers in Italian Dishes
Caper flavor increases when its mustard oil is emitted from its buds.  This enzyme reaction spurs rutin that manifests in the form of crystallized white marks along the exterior of caper buds.  Capers are used in all sorts of pasta dishes, seafood/meat entrees, pizzas, and myriad other Italian dishes.  Capers are also used in tartar sauce, sometimes served with cured or cold-smoked salmon.

It is particularly interesting to note restaurants as well as residents in southern Italy preserve capers in salt instead of brining them.  Head to Sicily and you will find capers are an important ingredient in the summer side dish known as Caponata.  This side dish features slow-cooked eggplant along with capers and other spices.  Take a trip to Naples and you will find capers are a key ingredient in Spaghetti Alla Puttanesca.  The capers in this dish are combined with anchovies, olives, and tomatoes.

The Creative Uses of Capers
Capers are used beyond traditional entrees and the occasional eggplant side dish.  These flavorful buds are also used in tapenades, pestos, and salads.  In fact, some Italians add capers to crostinis.  Especially adventurous culinary creators will serve up capers with mixed berries combined with pickled and brined veggies for quite the daring antipasti platter.

The extent to which capers are used in culinary creations ultimately hinges on the chef’s creativity and willingness to take chances.  Order a dish featuring capers and your taste buds are sure to be satisfied.