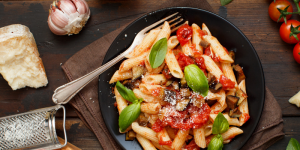 When people think about a trip to Italy, they usually think about delicious food. Italy is known for its pasta, and one of the biggest reasons why is this popular dish. Sugo alla Norma is a staple of Italian cuisine, and you may see it on every menu during your trip to Italy. In many ways, it is a celebration of Italy’s sweet summer eggplant, Which is popular all over the world. The dish is originally from Sicily, and it contains remarkably few ingredients. It’s simple, straightforward, direct flavors that make it one of the most popular dishes in all of Italian cuisine.

Also commonly called Pasta Alla Norma, the dish was created in Sicily during the early 20th century. At the time, a local poet tried Suga Alla Norma for the first time. When he tasted the dish, he was incredibly impressed by it. He even compared it to one of the most popular operas and Italian History, “Norma,” by Bellini. Since that time, the dish has been called Sugo Alla Norma.

What Goes In the Pasta Dish?

So, if you decide to order this dish during your next trip to Italy, what should you expect? Of course, the foundational ingredient is pasta. Usually, the pasta serve would this dish is short, tubular, and rich. The most common noodles included in the dishes include sedanini and tortiglioni, but you may find rigatoni as well. After this, there are thin pieces of fried eggplant that add a silky, rich flavor to the dish itself. Finally, the dish includes tomato sauce and cheese. It’s made of sauce may include basil and garlic along with red pepper flakes for some added spice. Ricotta cheese is usually the cheese of choice for this dish. You might even want to pair this dish with a delicious glass of red wine!

Even though there are lots of pasta dishes included in Italian cuisine, this is one of the most popular examples. If you haven’t tried eggplant before, this may be a nice introduction to this unique plant! Do not hesitate to branch out and try several pasta dishes to see what you like! Italian pasta is popular for a reason, and your taste buds will thank you!