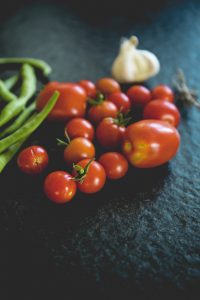 From Bolognese sauce to lasagna to parmigiana, it is virtually impossible to imagine Italian cuisine without the tomato. Yet as with chili peppers in India, potatoes in Ireland, and peanuts in Southeast Asia, Italians have only had tomatoes for a few hundred years. Before the Columbian Exchange, no one in Italy had heard of this fruit. By learning how the tomato became a part of it, you can understand Italian cuisine’s truly international character:

The tomato was originally cultivated in Central and South America, where the Aztecs and other pre-Columbian civilizations had used it in their dishes for centuries. The word “tomato” comes from the Nahuatl  “tomatl,” meaning “fruit.” When the Spanish Empire conquered the region, they brought the tomato back to Europe along with other local fruits, vegetables, and animals.

Though it is not known exactly when the tomato reached Italy, it must have been some time before 1544, when Italian author Pietro Matthioli wrote about it. Matthioli, however, believed that the fruit was poisonous. For this reason, Italians were slow to adapt it into their cooking, instead using tomato plants for decoration. In 1548, a Tuscan steward described the tomato as a “pomi d’oro” or “golden fruit;” this led to the modern Italian word for the food, “pomodoro.”

Despite the initial assumption that they were poisonous, tomatoes gradually made their way into Italian cooking. This was in part due to the influence of Spain, which controlled much of southern Italy during the 16th and 17th centuries. Spaniards taught Italians to fry tomatoes in a pan along with onions, squash, and eggplant, creating a dish similar to modern ratatouille. The fruit became popular in part because of its ability to flavor food, no small matter at a time when spices were expensive and hard to find.

By the 18th century, Italians had begun experimenting with tomato conservation methods. By boiling them and then sealing them into tight containers, they could keep the fruits in good condition throughout the year.

Tomatoes truly hit their stride in the 19th century, when Margherita pizza, pasta al pomodoro, and other staples of modern Italian cuisine came into vogue. Just as these dishes were becoming popular, Italy began its process of unification, helping to spread them and other cooking techniques more evenly across the country. It was also at this time that the Diaspora started, with Italians traveling to Brazil, Argentina, the United States, and other countries. This established Italy’s global reputation for cooking delicious tomato dishes.

For more information on the history of Italy’s delicious cuisine, or to try that cuisine for yourself, contact L’Amore Italian Restaurant today.