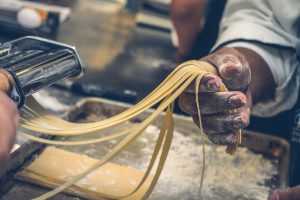 The widespread availability of international cuisines is among the most celebrated effects of multiculturalism on the United States. Few dishes are more popular here than Italian ones, yet Italian American specialties often taste different than those found in the homeland. The history of Italian food in America is one of cross-cultural pollination, with dishes from Italy being influenced by, and in turn influencing, other cuisines of the United States.

One of most notable ways Italian food changed in the United States was the incorporation of larger quantities of meat. Italian immigrants earned higher wages in America, allowing them to buy more meat. It is for this reason that meatballs are so much larger in the United States than in Italy.

In addition to incorporating more meat, Italian-American immigrants also made greater use of sauce. The deep red pasta dishes that Americans are used to are rare in Italy, where the noodles themselves usually play a larger role. Even when Italians do use sauces, they are less likely to opt for red sauce.

Italians also left behind certain types of foods. Oxtail, for example, is common fare at restaurants in Italy, but is rarely available on Italian American tables.

In addition to the types of foods consumed, Italian Americans changed the order in which they ate. In Italy, meals are traditionally divided into six stages, each containing a different type of food. Italian-Americans, however, began serving all major food groups in a single dish, speeding up their meals.

Cultural change is rarely one-sided, and American cuisine changed just as much as Italian food did. The most recognizable result is the popularity of pizza, which has become so widespread in the United States that many Americans claim it for themselves. Pizza has fused with foods from other ethnic groups in this country, and is often available at Mexican, Portuguese, and even sushi restaurants!

Pizza is nothing without cheese, which also grew in popularity thanks to Italian influence. Able to buy more milk than they could in the old country, Italian immigrants introduced mozzarella, parmesan, and other premium cheeses on a grand scale.

In addition to pizza and cheeses, Southern Italian immigrants helped to make seafood more popular in the United States. Sicilians had a taste for clams, which they found new ways to prepare once they reached our shores. They also helped create fried calamari, combining their taste for squid with Portuguese deep-frying methods.