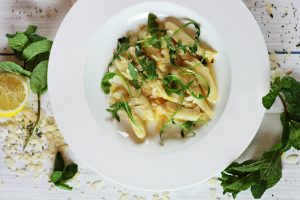 Americans love Italian food, and with good reason. Italian cuisine is among the most inventive, most variable, rich, succulent, colorful, and vibrant of the world’s culinary traditions. It’s also the product of a very long and storied national history replete with immigrant contributions and imaginative solutions to the challenges of scarcity as well as artistic responses to plenty. As an American, you probably know quite a bit about Italian food- maybe even more than you realize. Nevertheless, here are 4 interesting facts about Italy’s wonderful menu that you probably didn’t know.

Not many people understand that mixing the wrong pasta sauce with the wrong pasta shape is a big no no. Yes, it’s true that while different pasta shapes do taste more or less the same, as long as they are made from the same ingredients- not that they have to be. But different shapes of pasta go with different sauces. You don’t, for example, eat spaghetti with beans- or have short noodles with tomato sauce. But why? Well, tradition, for one thing. Also, the texture of a dish is as important as the flavor- and just as you wouldn’t want chicken gravy on waffles, you wouldn’t want couscous with Alfredo sauce.

Speaking of Alfredo, who is this saucy character? Well, it comes in a number of varieties like chicken and Fettuccine Alfredo. But as a matter of fact, Alfredo sauce is named after its inventor who owned a restaurant a little over a century ago. It was a very popular spot in Rome which was frequented by Hollywood celebrities who rapidly popularized it in the United States. That’s also why it’s a bit more common in the U.S. than it is in Italy. It is actually Italian, however, despite many claims of its being an apocryphal menu item.

What cheese really goes on pizza?

It’s a major topic of debate among Americans, who can’t get enough of the great round dish that carries. And of course, we wouldn’t want to disparage the creativity of American aficionados of this singularly morphophonemic entrée. To make a long story short, the answer is, mozzarella cheese is pizza’s natural topping.

While we’re on the topic of pizza, it’s interesting to note that the ‘pepp’ in pepperoni comes from peppers- as in bell peppers. Pepperoni is essentially a sausage made with bell peppers, giving its distinctive spicy kick.

Italians have a light breakfast

A lot of people are surprised to learn that while our friends across the pond enjoy famously huge meals, they tend to take very small breakfasts consisting of a strong caffeinated beverage and something akin to a scone. Why? Because they wouldn’t want to spoil their appetites, now would they?