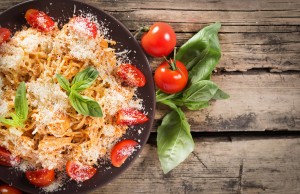 It is no secret that Italian cuisine is beloved around the world. Yet most diners are not aware of the rich history behind these tasty dishes. The country’s ancient inhabitants, the Etruscans, originally subsisted on a diet of meat, soups and variations of cereal. They invented olive oil and a long line of other staples in traditional Italian cuisine.  These staples “set the table” (pun intended) for the culinary explosion that soon followed.

Fast forward to the 8th century and the Greeks had colonized the southern portion of the country. Their primary foods included bread, vegetables, fruit, meat, fish, corn-based cereal concoctions, lupines, dry figs and pickled olives. The Greeks consumed also their fair share of walnuts and almonds, both of which are still commonly used in contemporary Sicilian dishes. The Romans centered their meals on meat, fish, vegetables, bread, fruit and wine. No matter what, bread was consumed with each meal.

Once the Roman Empire reached the verge of collapse, imperialists from northern Europe traveled down the Italian peninsula, hoping to gain a larger portion of land. They brought along smoked meats, smoked fish, salted cod (baccala) and variations of casseroles. Arabs in the southern portion of Italy introduced coffee, artichokes, a wide range of spices and rice at the same time. Arabic coffee is an excellent representation of Italian espresso: strong, dark and prepared in a highly nuanced manner.

The French, Spanish and Austrians also had a considerable influence on Italian food. As an example, Spanish invaders introduced the tomato. This vegetable soon served as the foundation of Italy’s delicious cuisine. The Austrians introduced locals to Spritz, an aperitif that spread like wildfire throughout Italy. The Arabs introduced Sicilians to the dish that later evolved into marzipan. This tasty creation quickly became an uber-popular dessert. It is also thought that the Arabs introduced cassata as well. Cassata is a cake made with sugar, royal paste, sheep ricotta and candied fruit. The Arabs also introduced Sicilians to sugar cane, oranges, lemon and an array of other foods.

Ask anyone about Italian food and most will quickly reference pizza. The original version of this scrumptious food was quite simple compared to today’s elaborate concoctions. Pizza’s origins date all the way back to 1889 when King Umberto I and Queen Margherita traveled to Naples. The country’s best pizzaiolo was asked to create pizza for these royal visitors. His best creation was rather basic, consisting of dough, mozzarella cheese, tomato and basil. He created this style of pizza in honor of Italy’s national colors. Queen Margherita enjoyed the pizza to the point that she wrote a letter of gratitude to the pizzaiolo, inspiring him to call the pie “pizza margherita”. This simple but delicious version of pizza is still consumed across the globe today and will likely continue to be cherished by the masses for years to come.

Come in today for a taste of Italy.