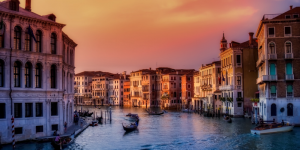 Do you have a trip to Italy coming up? If so, you might be swinging by Venice. Of course, Venice is known for its beautiful water canals, delicious food, and amazing tourist attractions. Even though you should certainly sign up for one of the famous boat tours, there are several important sites you should not overlook. What are some of the hallmarks of Venice you should see on your next trip?

Without a doubt, this is the most popular attraction in Venice. It is the most famous building in the city, and it has served as an architectural inspiration for countless other buildings all over the world. It has stood since 1092 and is one of the most important locations in Northern Italy to the state. Pay attention to the artwork, amazing sculptures, and unparalleled attention to detail. It contains numerous paintings from the Byzantine period, and it should not be missed during your trip.

Of course, the amazing city is lined with canals, but you should not miss the opportunity to head down the Canale Grande itself. Even though it is called a canal, it is much more like a river. It connects one side of the city to the other, and it has a large S shape to it, ensuring you can stop at multiple locations along the way. As you take a trip down the canal, make sure you pay attention to the amazing buildings that line it.

When you have had your fill of the popular tourist attractions, swing by the Lido. This is a separate island, and it creates a barrier between the Adriatic Sea and Venice. This is a beautiful beach that is inhabited by approximately 20,000 people. There are plenty of locations for you to get away from the crowd, kick back, and relax. Then, you can swing by some of the shops and restaurants to grab a bite to eat!

Get Ready for Your Trip To Venice

These are a few of the most important sites you should see during your next trip to Venice. This is one of the most popular locations in all of Italy, and there is always something fun to do. Do not pass up on the opportunity to try some delicious Italian food as well! It is like nothing you have ever eaten before.

Italy is home to an array of beautiful islands that collectively attract more tourists than France and Switzerland. It also possesses the most sightseeing places in all of Europe. If you are planning to visit this beautiful country, be sure to get to know the six islands of Italy and see which ones you want to visit.

Elba is found in the Tuscan region of Italy and has earned its place in history as the island where Napoleon lived during his exile between 1814 and 1815. There’s a museum here that tells you stories all about the notorious French Emperor.

Aeolus was the God of wind and the Aeolian island is where the ancient romans worshipped him. Panarea Island is the smallest of all the Aeolian islands. Due to the thin population and unspoiled beauty, it’s a very popular destination for the rich and famous.

Where the Gulf of Naples and the Mediterranean Sea link is where you can find the volcanic Ischia island. Because it is volcanic, it’s made up of several hot springs that are full of thermal waters containing health-benefiting minerals. You can see the bubbling water by visiting Maronti Beach.

Located next to Elba, Sardinia is considered the most visited island in the entire country because of its lengthy beach that runs for approximately 2,000 km. While this is true, it’s also made of picturesque mountains that overlook the water below. It is paved, which makes the perfect trails for adventurous hikers.

Capri Island is home to the Blue Grotto. It’s a cave found in the Gulf of Naples where you have to board a boat to see the electric blue water lit by the sun. This is another tourist-friendly area with a number of high-end hotels, along with great shops offering some of the highest end belts and shoes, along with heady perfumes and amazing Italian cuisine.

When it comes to Italy, there are more than a few islands to visit. Be sure to keep the places here in mind so you can plan your trip and enjoy all that this amazing area has to offer. By knowing what to expect, you can easily use the information here to find the best of the best attractions.

Italy is full of wonders from the past. From the Roman Empire to the Renaissance, visitors can explore art, architecture, and ruins. In fact, Italy has more UNESCO World Heritage sites than any other country. Travelers can also visit the natural beauty of Italy – her lakes, mountains, and gorgeous coastline. If you’re planning a trip to Italy, here are the five top tourist attractions to put on your list.

Whether you’re a history buff or just love everything about the Roman Empire, visiting the Colosseum is a must. This one of a kind gigantic amphitheater is famous throughout the world as being a past sports venue with the most spectacular shows. Explore underneath the Colosseum to see the cells and tunnels the gladiators used, along with where the wild animals were kept.

The romantic city of Venice is a must, especially if you’re on your honeymoon. Take a gondola ride through the ancient canals along a labyrinth of narrow passageways that wind around the city. From this vantage point, you’ll have amazing views of Venice, including her most historic sites.

The city that died in an instant, Pompeii is famous for being destroyed by a sudden volcanic eruption in AD 79. In fact, Mt. Vesuvius is still blowing smoke! While the inhabitants of Pompeii perished, the eruption did manage to preserve the city’s art. Such treasures as mosaics, sculptures, and frescoes have been encased in lava that then cooled. Archeologists discovered these treasures two centuries later, along with temples, baths, homes, streets, theaters, and human remains.

Pisa is itself a famous city, but it’s the Leaning Tower of Pisa that is the most popular attraction here. The tower was built in the 1100s but due to sinking, it began to lean by the time the third story was completed. The tower was expected to topple over by the year 2000 so restoration work began in the 90s. Today, the Leaning Tower of Pisa is stable and visitors can climb the grand stairs to look out over the tower for a spectacular view of the city. While in Pisa, visit the Romanesque Cathedral of Santa Maria Assunta.

Nature lovers will definitely want to make time for a trip to Lake Como. This is where the wealthy Romans of Ancient Rome vacationed. The lake is surrounded by small, quaint towns and beautiful mountains. Along the shore, you will find lavish villas and palaces with some gardens open to the public. The climate is mild, making Lake Como the perfect place to unwind and relax after visiting the buy, historic sites of Rome.

Italy is one of the most visited countries in the world. This means crowds and more crowds. While you don’t want to miss out on the top tourist attractions like the Colosseum, the Vatican, the Leaning Tower of Pisa, and more, there are some off the beaten path destinations in Italy where you can miss the crowds and get to know Italy at your own pace. Read on to learn about the best places to explore in Italy that are off the beaten path.

This village sits on the side of a mountain. It’s cute, quaint, and not so easy to get to. You can drive up there but some choose to take a zip line to the village. Either way, it’s worth the trip. In fact, it’s one of the highest villages in all of Italy and the houses sit perched on narrow ledges that drop into a gorge. While here, visit the ruins of the ancient city walls of Castrum Medianum, along with other attractions, such as the historic castle, abandoned mills, and more.

Known as the region of forests and mountains in Southern Italy, Basilicata has many cities to visit with a plethora of things to do. Visit the hillside caves that date back thousands of years. There are also one hundred and fifty rock-cut churches to visit. There are many small, charming villages to explore, as well as many lakes.

Located in the northern regions of Italy, Trento sits on the River Adige. It’s considered one of the richest cities in Italy and the people here enjoy a high standard of living. Trento has a long history with ancient Rome so you’ll see lots of historical structures left behind, such as the Duomo and the Castello del Buonocnsiglio. There are also many museums and galleries to visit, along with fine shopping. In the winter, there are plenty of opportunities to ski nearby.

Also located in Northern Italy, Lombardia is the Italian hub of finance and fashion. There are many high-end restaurants and shops. One of the most touristy things to do is visit the Gothic Duomo di Milano cathedral and Santa Maria delle Grazie convent, which houses Leonardo da Vinci’s painting of “The Last Supper”. Lake Como is also a short distance away.

Known as Italy’s “Middle Earth”, Valsugana is a fertile plateau dotted with vineyards. In the distance, you will see snow peaked mountains all year round, as well as historic castles that look down from the hills above. Valsugana is full of beautiful rivers, lakes and streams that reflect the mountains and castles, making this a truly magical place.